What Is A Pembroke Welsh Corgi?

The latest AKC Pembroke Welsh Corgi breed standard was approved on June 13, 1972 and reformatted on January 28, 1993, but original recognition was granted in 1934. The standard is what all breeder’s should be striving to meet, and simply put, describes the ideal Pembroke Welsh Corgi. But what is a corgi? 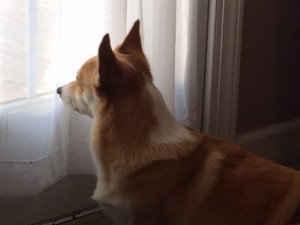 Corgis originated in Wales, and legend has it that the sturdy little dog slipped away from his farmhouse every night to frolic with the elves and the fairies. If you’ve ever seen a “saddle back” tri-colored corgi, you have witnessed where the fairies rode, and some even have a “kiss” (a dot) on their forehead where they have been marked! During the day, the corgi found work on the farm by assisting his master in herding cattle, hunting vermin, and generally guarding the land.

Corgi literally means “dwarf dog,” aptly named due to his short legs on a larger body. There are two types of corgis, the Pembroke and the Cardigan. Our love here at Cook Arena Corgis is the Pembroke, which is a smaller, more refined dog that is generally known for his lack of tail. Pembrokes are actually born with a tail, but it is cropped when the puppy is three days old, and stems from a tradition that dates back to his days as a working dog – no cow can step on a tail that is not there!

While Corgi’s were not recognized by the AKC until 1934 as mentioned above, the British Isles did so in the 1920’s, with the English Kennel Club also jumping on the “corgi bandwagon” in 1934. Many people today still recognize Pembroke Welsh Corgis due to their long history with the British royal family, which began in the 1930’s and still helps boost the popularity of the breed to the general public. In fact, due to Pembroke Welsh Corgis really not beginning to be imported into the United States until after recognition, most American’s did not first see the breed until thirty years after their introduction when Queen Elizabeth II appeared on the Farm Journal cover with some of her loves. Walt Disney’s television film, Little Lost Dog, which aired around the same time, further cemented the Pembroke Welsh Corgi’s history in the United States, and left the general public asking for more!

So now that you know the answer to the question, “What is a Pembroke Welsh Corgi,” check out the rest of our site to learn more! You can also visit www.akc.org for more information!